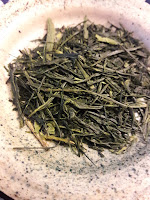 Tosa Han (Tosa Province) is the feudal era name of the region comprising present-day Kouchi Prefecture, on the island of Shikoku. It covers a good portion of the southern and western ends of the island; facing out to the Pacific Ocean, but also with considerable mountain and valley area in the interior. It is not well-known, even in Japan, as a tea growing region; but I was surprised to learn that even during the Edo Period (1600-1868,) under the rule of the Yamauchi Clan; tea was produced and sent as an export item of the province to Osaka as part of the growing merchant economy of the time.

Much of Tosa Tea is grown in the Niyodogawa River Valley, in western Kouchi, and I have carried tea from this region, grown in Tsuno,  before. Lately, I haven't been able to acquire enough due to low production.

This tea, however, is grown on the eastern side of the Prefecture in an area called Nyugauchi, east of the city of Aki, at the upper basin of the Ioki River. This mountainous region has the prerequisites for good tea growing in Japan; river valleys that have appropriate climate changes from morning to evening, good rainfall, and rich soil.

The tea comes from Maruya Cafe, whose parent company distributes local products of the area such as Tea, Yuzu Fruit, and other items. The company CEO's mother in-law is the grower of the tea.
At age 89, she is still a young and healthy tea farmer!

Fortunately, a friend living in Kouchi Prefecture came to visit the U.S. recently, and brought me some of this fine Tosa Shincha (new harvest tea) to sample. It is of the Yabukita varietal, and like most Japanese teas is steam processed. There are Tosa tea producers are using pan-firing (kamairi) processing as well.

What surprised me most about this tea were two points: the variety of flavors produced in the individual infusions, and the number of infusions produced. This is also due to the fact that I have yet to become fully acquainted with this tea and its personality. More practice will probably lead to more consistency in flavor, but may also lead to new discoveries.

All infusions were done with the same 3 gram sample and 60 ml (4 oz) water. The first infusion brought out the marine air notes, both in aroma and taste, that I associate with Tosa Tea. This is one of the things I like best of teas from this region. My first cup, at 175 F (80 C) for 90 seconds had a pleasant taste and aroma, but was too light and will need more time in the next tasting.

The second infusion, at 180 F (82 C) for 60 seconds brought out too much astringency, and a slightly rough taste. Less time and less heat were needed to bring about something more ideal. But the bell cannot be un-rung when brewing tea, and you just have to move forward.

Here's where I was pleasantly surprised. Many Japanese teas usually start showing an optimum flavor profile in the 2nd infusion, after the leaves have opened up. In this tea, after opening in the 1st, and releasing some shibumi (astringency) in the 2nd, produced some fine mellow notes in the 3rd and 4th infusions, and even in the 5th, although much more subtle. Each infusion showed slightly different characteristics of sweetness, umami, grassiness, but the marine component had dissipated quickly after the 3rd.

The tea continued to produce some flavor even in a 6th and 7th infusion, albeit very subtle, and was no more astringency. The almost tasted like warm versions of mizudashi (cold-water infused) tea that has little to no astringency, but still some hints of the original hot tea flavor.

All on all, this was a very pleasant tasting experience, and I look forward to further experimenting with this tea, hot and cold, to get to know it better. I also look forward to trying to get my hands on Tosa-cha next year to share with my Charaku Tea family.