I have yet to be a blogger who posts what or where I eat, but I thought I would depart from my usual sales announcements to a post showing some of our pottery collection in use.  It is when pots are put to use that they are truly completed. I hope you enjoy these images of pots with food.

A recent trip to the East Coast New England states has made me think much more about America's colonial history. As such, I decided on a Thanksgiving menu using ingredients that were more likely in use during the original Thanksgiving feast, in 1621, than the turkey-centered meal that we today consider "traditional." These would have included shellfish, such as lobster; wild fowl, corn, and root vegetables. Venison was also integral to the first Thanksgiving meal (but I was vetoed on this by the ladies of the house who felt that deer were too cute to eat.) To these, I applied some Japanese twists and a few tweaks of my own. The menu follows a kaiseki course format, although my food is a long way from the standards, tastes, and spirit of true kaiseki. I just used the courses as a guideline for developing a menu of my own amateur food. This this I added my true gratitude for good friends and good pots to enjoy on this Thanksgiving holiday. 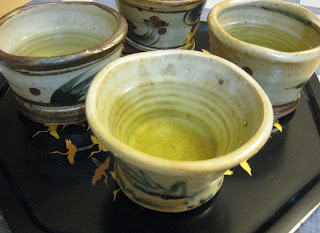 MUKOZUKE: The actual first course features a small amount of rice, miso soup, and food served in a mukozuke dish. Although simple black lacquer is preferred for the rice bowl, I've used a favorite kaki-glazed chawan by Soeya Shuuichi of Mashiko. The soup is corn and roasted butternut squash in corn stock with white miso, served in Sendai-nuri black lacquer. In another Mashiko-yaki dish is Lobster, leeks, & spinach simmered in sake and a light soy sauce broth. 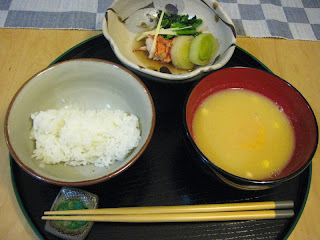 WANMORI: A clear soup is served with the first appearance of sake to drink with the meal. Here, in a Sendai-nuri lidded black lacquer bowl is Turkey & grated apple balls and daikon radishes in consomme. (I had to work turkey in somehow!) A variety of guinomi (sake cups) on a Kamakura-bori lacquer tray are available for guests to choose. These include a few by the late NLT Shimaoka Tatsuzo of Mashiko, a slip-trailed Onta-yaki piece, and others. The sake ewer is a playful piece with paintings of kappa (water sprites.) 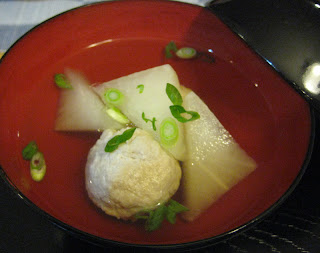 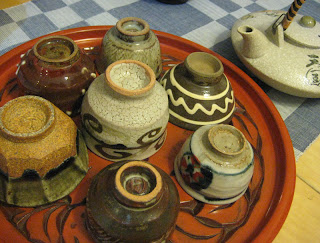 YAKIMONO: A grilled dish. Wild fowl, such as duck and pigeon (and wild turkey) was plentiful in colonial times. We served duck breasts, with a light teriyaki-sauce and coarse-grained mustard. The 6-sided dish is of unknown origin, from my parents' collection, but is reminiscent of red & green overglaze Kutani ware but in stoneware and of simple design. More rice and sake are served with this dish. 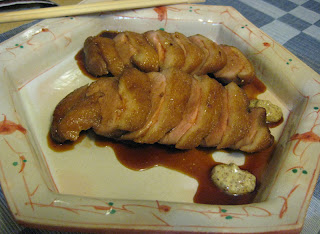 AZUKEBACHI: A dish left at the table, and in this case a simple salad of lightly boiled green beans with karashi (spicy mustard) - soy sauce dressing. The bowl is a lovely wood-fired, chatter-marked bowl by Maine potter, Betsy Levine. 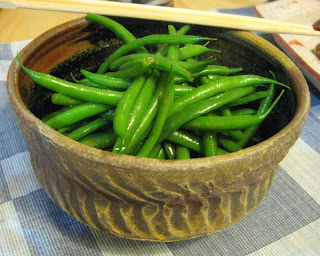 HASHIARAI: Literally translated as "chopstick wash," this is a palate cleanser much like a sorbet in a French course meal. Simply hot water flavored with kelp, I also added a crushed fresh cranberry for a subtle Thanksgiving tartness. The vessel is a mid-Edo Period (1600-1868) Imari Soba Choko with underglaze cobalt blue painting. 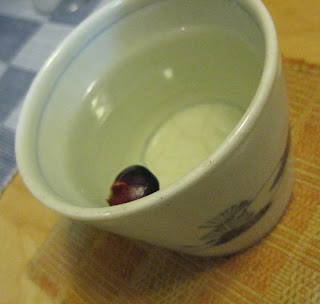 HASSUN: Like other courses named after the dish used to serve them, a hassun is actually a bare cedar wood "plate" measuring "hassun, 8-sun." In it, the course features an item from both the sea and the land. Here, I used a small Shino glaze plate with scalloped edges by renowned Mino-yaki potter Kato Kozo to serve a single scallop pan-basted in soy-ginger-lime butter, and maitake (hen of the woods) mushrooms lightly sauteed in wasabi vinaigrette. We changed the sake server to a wood-fired Bizen-yaki tokkuri. The kiln placement over a cup leaves a round shadow, suggestive of a harvest moon. This evening's sake was Tsukasabotan, brewed in Kochi Prefecture on Shikoku Island. 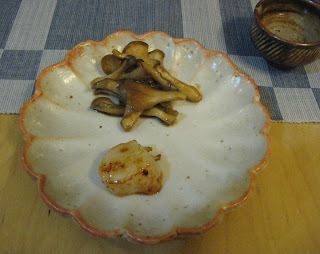 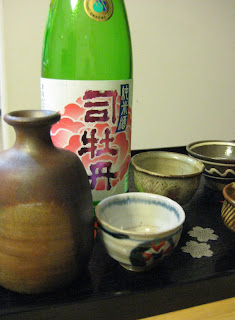 YUTOU, KOUNOMO: A yutou is a lacquer, spouted ewer to serve the scorched rice from the bottom of the pot with hot water. Instead, I've grilled salted rice balls, onigiri, stuffed with leftover turkey and cranberry sauce. This was a suggestion of my guests, initially half as a joke, to use the leftover apple-braised turkey thighs and cranberry-orange sauce from the kid's meal. We then discovered the similarity of cranberry sauce to the tartness of umeboshi (pickled plums) and gave it a try. The crunchy rice balls are served with Charaku Houjicha (Roasted Green Tea) from Chiran in Kagoshima Prefecture, and topped with toasted nori (seaweed.) The bowl is a vintage kaki-glazed Mashiko rice bowl.
Kounomono are pickles, and here we served the traditional takuan, pickled daikon radish named after the Buddhist monk, Takuan, and pickled gobo (burdock root.) The bowl is a contemporary piece with momiji (Japanese Maple) decoration by Dwo Wen Chen, a Connecticut potter originally from Taiwan. The technique used is to imprint real leaves on green clay that are then burned off in firing. Colored glaze is then painted into the leaves "ghost" and fired a second time. 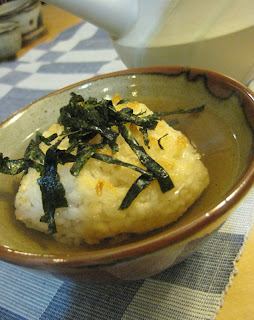 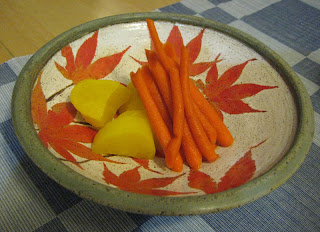 DESSERT: The dessert course in kaiseki cuisine includes both moist and dry Japanese confections served with matcha. I  gave this portion of the menu an American twist and went with an old-fashioned Apple Streusel. However, the surprise in the streusel topping was white miso, giving an additional element of umami to the dish. This was topped by another Japanese taste, yuzu-vanilla ice cream. Yuzu fruit is synonymous with winter in Japan, and the piquant flavor goes well with miso. This was served in a funky mug by Roy & Chieko Martin, formerly of Kasama, Japan, the same potters as the first dish used in the kumidashi course. A second dessert was brought by our guests, and was a perfect match for the season; a whipped sweet potato mousse topped with walnuts. It was somewhat reminiscent of both American sweet potato pie and Japanese kinton desserts. Another item for which to be thankful! We used a Shino-glazed square dish, wire cut in a thick slab by my good friend George Gledhill of Payette, ID. 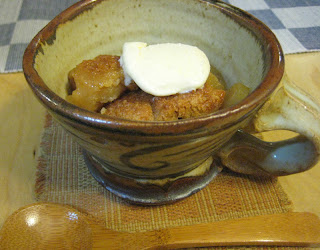 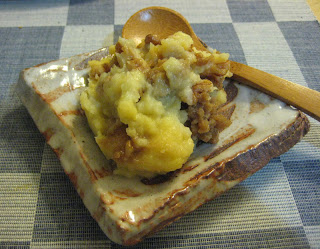 MATCHA: The finish to a formal meal is matcha. Although we used a number of chawan (bowls) for guests our Charaku Premium Organic Matcha, these two photographed nicely. One is an Oribe ware fuyu-chawan (winter tea bowl) with high sides and an image in a square window on the front. The other is a black raku bowl by Geoge Gledhill, who is noted above. 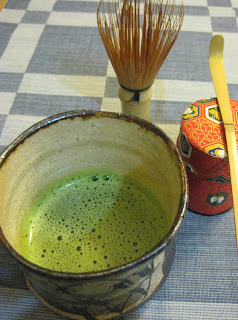 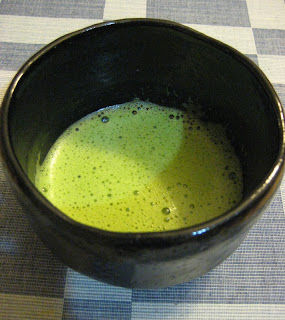 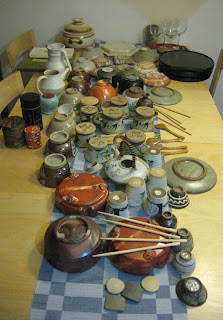