More food & pottery photos. I like to show how food (albeit my amateur food) completes the pots.

Friends came over for a late-winter meal and it took me some time to figure how best to utilize some of our pots, and also what kind of menu to create. Early February is not New Year's and also not yet "Hina Matsuri" (Girl's Day / Doll Festival) or time for spring dishes.

I thought back to this time of year in Japan and of course thought of "Setsubun," which is the traditional new year and division of the seasons. Toasted soybeans are thrown at home and in Shrines to bring in good luck and drive away evil spirits. I also remember that it's also not long after "Bonbori Matsuri" or "Takiageshiki," the time when past year's amulets and other items are burned. When we lived in Mashiko, each neighborhood (buraku) built a large tee-pee shaped tower of straw that was filled and covered with amulets, dolls, and other items that were burned in a huge bon fire. Neighbors passed around steaming hot bowls of ton-jiru (pork soup,) which is popular at community events all over Japan. It was also a specialty dish of my late uncle Yoshio's, and our family called it buta-jiru (buta=pig/pork.)  And then, Valentine's Day was right around the corner. How to work that into a Japanese meal? Here's what we ended up with. 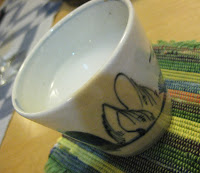 These mid-Edo Period (1600-1868) Soba Choko opened the meal with a simple fragrant drink, the Kousen course, kuzuyu. kuzuyu is an old-fashioned drink made from kuzu-root starch and hot water. This one was flavored with yuzu (citron) juice, a typical winter fruit. Kuzuyu is most often mixed with sugar and taken as a dessert. Other common additions might be matcha, or ginger. 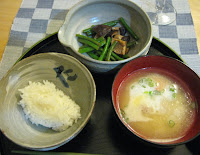 The second course, Mukozuke, was a warm shiitake mushroom and green bean salad, dressed with lemon-soy vinagrette. This course always featured a small amount if rice and miso soup. The aforementioned ton-jiru was the miso soup, but I tried to elevate this a bit by serving the soup around a mound of creamy mashed potatoes, instead of country style chunks of potatoes and vegetables.
The end result was a kind of potage - tonjiru.

A variety of muzokuke dishes were used. The trio shown here are
(L-R) a Mashiko-yaki lobed dish, a Mashiko-yaki katakuchi (spouted bowl) and a contemporary porcelain dish by Nakazato Hanako.

The same goes for the gohan chawan (rice bowls) below.

(L-R) A gray hakeme bowl made by a student of mine in Mashiko, with my hiragana initial "ta" drawn in; another hakeme bowl by Haraguchi Shintaro, of Zushi (Kanagawa Prefecture;) and a vintage Mashiko chawan with classic kaki-glaze exterior.

The soup bowl shown above in Sendai-nuri lacquerware from Tohoku Prefecture. Again, in deference to my late uncle from Sendai. 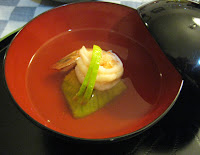 The third course, Wanmori, is clear soup (osuimono) served in lidded Sendai-nuri lacquerware. A large shrimp is served over a piece of melon, finely cut in a cross-hatch pattern. Uri, wintermelon, is commonly used here, but I went with Honeydew melon which imparted a slight sweetness to the soup. The lime rind is cut to resemble pine needles, a symbol of winter.

Sake is introduced into the meal at this point. A number of Mashiko-yake guinomi are offered for guests to choose from. The sake was also from Tochigi Prefecture (where Mashiko is located,) "Miya" from the Hokkan Brewery in Tochigi City.

The Yakimono, or grilled dish, course follows with Yuuan-yaki style swordfish. Yuuan-yaki employs a short citrus(usually yuzu)-sake marinade and a citrus-soy glaze, as opposed to teriyaki which is strictly a post-grilling glaze. With the lack of fresh yuzu here, I used in-season fresh pink grapefruit juice with interesting results. The original dish is said to have been developed by Yuuan Kitamura, an 18th century tea master, who used the dish for a tea gathering meal. The plate used here is by Bellingham, Washington potter Don Salisbury. 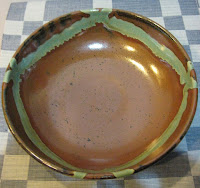 The Azukebachi course follows next. One was mussels simply steamed in sake and garnished with fresh ginger.  The bowl is another Mashiko piece, with a classic kaki (persimmon) glaze with seiji green overlapping bands. The bowl is also shown below "naked." The shell bowl is a katakuchi, spouted bowl, by Roy and Chieko Martin, formerly of Tomobe in Ibaraki Prefecture. Roy's free forms and Chieko's playful brushwork (a heron in this case, a common bird in our Skagit Valley) work so well together. Another azukebachi dish was a raw daikon radish and kaiware (daikon radish sprout) salad with soy-vinegar dressing. The bowl is by Tanaka Yumi of Mashiko, and is a piece we acquired while living there over ten years ago. 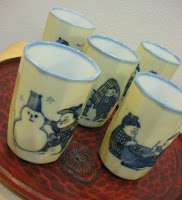 The Hashiarai (chopstick wash / palette cleanser) course was a simple kombu-yu (kelp water.) We used some vintage cups that were not artisan-made, but we liked the winter imagery of children playing in the snow. The images certainly depict winter, and for me conjure images of the stories my mother used to tell about her childhood in Sendai, Miyagi Prefecture. Straw snow capes and boots, snowman (yuki Daruma) building, grilling mochi on a charcoal hibachi, and having hot tea in a yuki-kamakura (snow igloo) were all scenes from those stories and images on these playful yunomi (tea cups.) 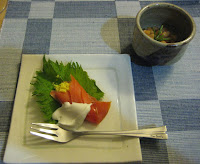 The Hassun course is named for the dish it is served on, with two simple elements (one from the sea and another from the land) with which to enjoy sake. In Western terms, it's almost like an appetizer, but in the Japanese menu it's served at the end. I choose to use two dishes instead here. A dessert plate by local potter Mika Sullivan has smoked Sockeye salmon, with boiled egg yolk, shiso leaf, and a bit of yuzu-sour cream "snow." It's meant to evoke an image of a winter camellia, the sasanqua. In the guinomi above it, nimame (simmered soybeans) give a nod to the Setsubun holiday and are scented with fresh rosemary. The cup is by the late Ooka Mataemon, whose widow and nephew befriended us in Mashiko, and taught us much about the history of the area and its pottery. We will always be indebted to the Ooka family. 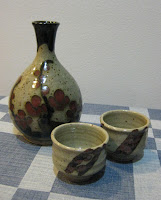 This course is also the time for host and guests to share sake. It can also be a course where an inference is made to the coming season, usually with a menu item. Here, I've chosen to bring out a different tokkuri (sake decanter.) This was also made by Ooka Mataemon and features imagery of plum blossoms (the first blooms after winter.) The famous plum trees of Mito, in nearby Ibraki Prefecture, have created common decorating themes for Mashiko pottery since its beginnings in the mid-1800's 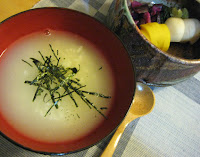 The final rice dish, Kounomono, can be one of a variety of rice preparations. This night, I chose to make okayu, or rice porridge/gruel. This version is actually cha-gayu, made with tea. I used a sencha and gave the porridge a simple garnish of toasted nori. Pickles are also
essential to this course, and takuan (daikon radish,) turnip, and cucumber pickles accompanied the rice dish. We used low, oversize tea bowls for the pickles. The two used were an Oribe piece and a wood-fired piece from Maine. 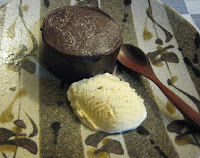 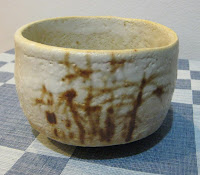 Matcha completes the meal and a variety of Matcha Chawan, Tea Bowls, were used. Among them was this Shino-glazed winter bowl with a bamboo grove image painted in iron. This piece was by a pottery teacher in Kamakura who generously parted with it. It's a piece I love using in winter, not only for its shape, but for the glaze's resemblance to freshly fallen snow. Another piece is a wood-fired winter bowl by George Gledhill of Payette, Idaho. There are some chips in the rim needing repair, but it's a wonderful contrast with a lustrous black glaze with interesting fire marks. 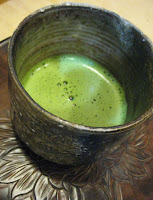 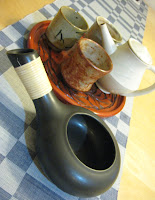 Post meal, I roasted some sencha to make homemade houjicha. This can be done in a dry pan, but there is also a device designed for this, the houjiki. The aroma is much more intense than packaged hojicha and makes a refreshing digestif after a meal. 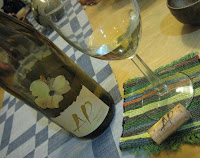 I'll add this as well. Our guests brought a lovely wine that paired well with both Japanese food and sake. Windfall Winery of Prosser, Washington, produces this lovely Asian Pear Wine. It was a perfect choice, and a lovely addition to the menu. If you're ever looking for a good wine to go with Japanese food, search for this one. 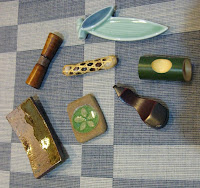 Here are a variety of hashioki, chopstick rests, from our collection.

And always my favorite photo, the clean-up. Here are dishes for a party of five. 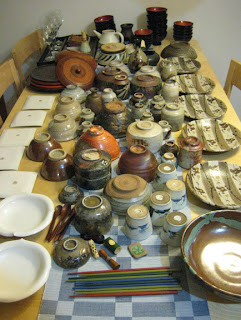