I've collected a few items in recent months that represent what Japanese tea importers, like myself, were doing in the late 19th and early 20th Century. These will actually be making their way back to Japan to be displayed at a tea company there. They are interesting for their historical value as well as aesthetically for the visual impact of turn of the century advertising. It's also interesting to note that many of the same key features of tea marketing today have changed little since then. Much of the talk of tea's health benefits is touted as "new" because of current research, but importers and exporters were proclaiming tea's health advantages nearly 100 years ago. There are, however, vast differences in production, packaging, and shipping from those days to the present. Steamed teas had to be "pan-fired" again before being boxed up for shipment in order for them to survive longer shipping times and prolonged shelf life. Our Charaku teas are steamed in the traditional method, then nitrogen-flushed in small batch 50 gram pouches to retain maximum freshness until enjoyed everywhere in the world our customers reside. Tea has remained a truly wonderful beverage throughout its long history, but modern agriculture, packaging, and shipping advancements allow us to enjoy tea's benefits wherever we are!
I hope you enjoy these images! 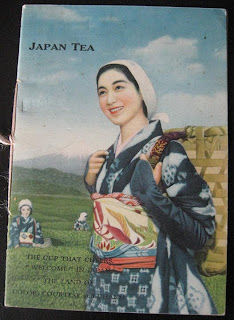 This little pamphlet from the Tea Exporter's Association of Shizuoka was my favorite find from a used book store in Massachusetts. It's a tiny thing, only about 4"x5", but packed with wonderful images of tea life in Japan. The cover features a lovely young maiden working the tea harvest, adorned in an indigo-dyed kasuri (ikat) apron, and a woven bamboo harvesting basket on her back. Lush green tea fields are behind her and the perfect Mt. Fuji watches over tea country in the distance. Similar young fresh faces have been used in nearly every form of Japanese advertising, from war-time propaganda to Coca-Cola. Still, it's an image that works well. Just looking at makes me want to drink tea!

One of the interior pages has another tea harvesting image, and notes the Japanese "Appreciation of Tea." But this appreciation is also "shared by those who understand, drink, and enjoy the benefits of tea." Are you one of these?
Further pages talk about tea ceremony, tea's ability to promote longevity, tea production, Japanese green and black teas, and tea distribution. The pamphlet was specifically for the U.S. market, but it also mentions that Canada and Russia were also large importers at the time. Were they trying to stir up competition?
Another interesting page discussed the purity of Japanese tea. At the time, the U.S. had banned the importation of artificially colored teas. The pamphlet proclaims how the Japanese government was cooperating by stopping this manufacturing process. 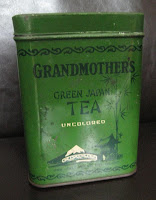 This little tea tin of Grandmother's Green Japan Tea makes note of the "uncolored" importance mentioned above. To this I ask, "Artificially colored teas? Why???" 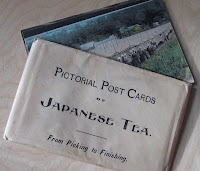 These images are from a vintage set of hand-colored post cards. They depict a series of tea processes from harvesting (above) to sorting, to pan-firing (left) and packing. The image of the women harvesting tea at Uji above is not quite the same as the gal on the pamphlet cover.
The photo of loin cloth clad men  pan firing tea gave my kids a good laugh. "Why are they making tea naked?!" It's interesting in that teas then had to be pan fired instead of steamed to reduce moisture content that would have then caused spoilage. 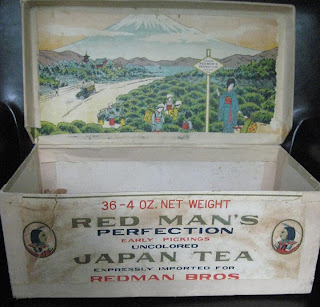 This paper tea box was used for a retail shelf display and was discovered in the Mid-West.
Today, the brand name would likely be considered politically incorrect, but political correctness aside, would you buy Japanese tea named "Red Man's" with a Native American's face on the box? 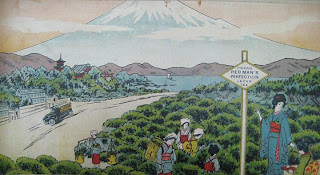 This image from the inside lid is quite romantic.
I highly doubt that the field in Japan was labeled with a "Red Man's Perfection"or (if you look closely) a truck expressly for the packaged Red Man's tea boxes. Still; the terraced fields, the woman in kimono receiving tea from a serving girl, the temple and pagoda, and the towering Mt. Fuji in the background create that lovely and iconic image of the Japan that was first introduced to the West. 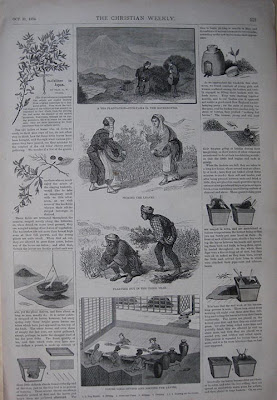 This 1874 newspaper article by Prof. E.W. Clark from "The Christian Weekly" discusses tea, and tea production, in great detail for a readership somewhere in the U.S. NorthEast.
I'll quote the close of the article, which I found most interesting. "Of course, the best tea remains in Japan, and the poorest goes abroad; but as we usually spoil it's flavor with our milk and sugar fixings, perhaps it does not make  much difference after all.
All the tea which is exported here has to be "re-fired"again in Yokohama or some other port. Here they do the thing on immense scale in large stone houses, where hundred of men and women are employed in heating and rolling the leaves again, and putting the "finishing touch" on the whole process; this is absolutely essential to preserve the tea, and render it fit for transportation. The fresh tea odors which greet you as you as you pass the open windows of these tea-firing establishments, are such as would make our old lady friends smack their lips with delight.
The cultivation of the tea plant is yearly increasing, and the Japs are building up their tea trade to an extent which will bring vast benefit to themselves, and at the same time afford a deal of comfort to all the old folks at home." Wow, Im glad that we've come along way since then! 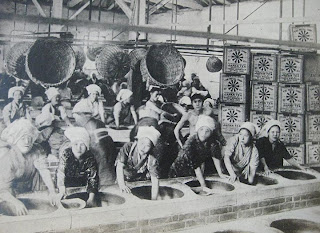 This last image, from the Philadelphia Museum, shows one of these pan-firing establishments.
Notice the boxes in the background ready for packing. I assume this was at the Port of Yokohama, and these "Royal Chop" boxes of Japanese tea would be on a ship bound for San Francisco shortly.
Posted by Charaku - WaSabiDou at 5:20 PM No comments: