-Looking for the Japanese Thanksgiving menu & photos? Continue on to the next ("Thanksgiving 2012") post.-

December greetings!
Our December Open House will be on Saturday, December 8th in Seattle, 10am-5pm.
Tea makes a great gift for the holidays; warm, healthy, & cultural enriching. We also have lots of pottery in which to serve it (see more below.) Please feel free to contact me (206.660.4189) for info
and directions if you are in the Seattle area. 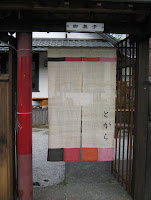 I'll also be serving matcha at Tokara Japanese Confectionery in Seattle on Sunday, December 16th, 1-6pm. Charaku loose leaf teas and matcha will be for sale, along with Tokara-san's wonderful wagashi (Japanese seasonal sweets.) A bowl of matcha with an order of wagashi is $5, cash only. For take-out orders of sweets, it's best to reserve in advance. Contact Tokara-san for info, 206.784.0226, www.tokaragashi.com.

Speaking of tea; I'm happy to announce that despite the slow economy and the unfavorable exchange rate, we're reducing prices on several of our teas.
As many of you know, we added more Organic Sencha offerings this past year, and the response has been such that we can now purchase in amounts to realize better pricing. Prices for Mizayaki, Oita, and Yakushima Organic Sencha are all reduced considerably. We're also spreading the savings out to some of our higher end teas and lowering prices on Yame Gyokuro and Takachiho Kamairicha by one dollar per 50 gram package, and by more than 50 cents on our Chashi Meijin Fukamushicha. Visit our tea shop page to order at these newly reduced prices.

On the craft side, we are pleased to now carry the work of Hanako Nakazato. Nakazato-san is a 14th generation potter from Japan. The Nakazato family is a well-known pottery family in Karatsu, Saga Prefecture, with the 12th generation Nakazato Taroemon being designated a National Living Treasure for Karatsu ceramics. Hanako moved to the US at age 16 to pursue her education. While in the US, she took a renewed interest in her cultural roots, especially the Japanese food culture, and decided to return home to to learn pottery from her father, Takashi Nakazato. She has now created her own unique style of contemporary functional wares in porcelain.

Her debut exhibition at Manyodo Gallery in Tokyo, in 2000, she has
shown her work extensively in Japan and the US. In 2007, she
established her studio monohanako in Karatsu, Japan. In 2010,
she established another studio, monohanakowest in Union, ME.
She currently divides her time between Japan and the US. Visit the
"Ceramics" catalog at WaSabiDou to see some of Ms. Nakazato's
work. Here are some samples: 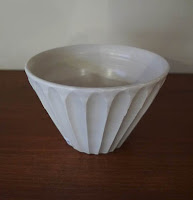 We're also receiving new work from Portland, Oregon potter, John Miller. John's work was very popular last year and sold out quickly. His forms are much inspired by 20th Century Mashiko potters such as Shoji Hamada and Tatsuzo Shimaoka, built on the strong technique learned under Ben Ryterband at Mass Art in Boston. The yunomi are certainly a pleasure to hold and use.

We have also recently acquired a lovely woodblock print by the late Clifton Karhu. "Takasegawa Spring" was printed in 1990 and depicts the Takase River, a canal that runs along Kitamachi Street n Central Kyoto, Karhu's home and favorite source of landscapes for his prints. It show the masterful technique of creating rain in the print's foreground. 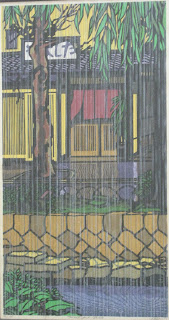 Lastly, I'd like to mention an acquisition of several classic books on Japanese art and culture. Not only are these important works and sometimes rare titles; they are primarily first edition copies in new condition. Something for either the art or book collector, or reference guides for artists!
Titles include: The Unknown Craftsman by Soetsu Yanagi, Hamada Potter by Bernard Leach, A Feast for the Eyes: The Japanese Art of Food Arrangement, Kaiseki: Zen Tastes in Japanese Cooking, Shibori, Karatsu Ware, Shigaraki: Potter's Valley, The Art of Rosanjin, The Tea Ceremony by Sen'o Tanaka, Yoshitoshi: The Splendid Decadent, The Genius of Japanese Design, and more! See the books page of our WaSabiDou site to see the complete list. 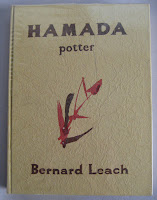 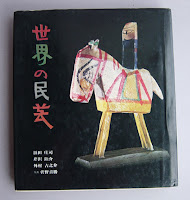 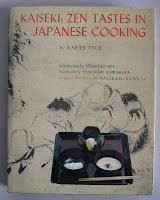 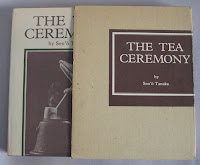 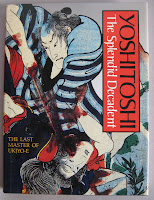 Thanks to all of you for your continued support throughout the year, which in turn, supports the many tea farmers and craftspeople on whom we depend for continuing their traditions and for meeting challenges with innovation. I'd also like to send out to our many friends on the US East Coast our wishes for full recovery from this fall's powerful storms.