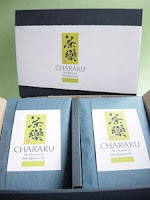 People buying a gift of tea for a tea lover often ask me what to put into our Gift Boxes. The box holds four x 50 gram packs of our Charaku Fine Japanese Tea. I usually ask if the recipient is a new tea drinker, or someone with specific tastes.

A variety pack for a beginner could be: 1 Sencha, 1 Genmaicha, 1 Kukicha or Kariganecha, & 1 Gyokuro.

Another way to go is 4 Sencha from different appellations in Japan' for example: Uji, Kagoshima, Oita, Saga Prefectures. 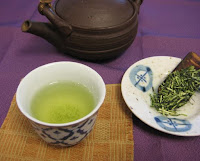 We have about 10 Sencha, all at sale prices, from which to choose at http://www.charaku-tea.com/tea.html. 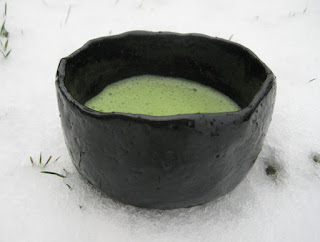 Winter greetings!
On-line Sale is on now! And, this Saturday & Sunday, December 10 & 11, I'll be having an Open House Sale in my Seattle showroom.
Everything on-line and in the showroom is sale-priced, up to 15% off. This includes both the Charaku and WaSabiDou websites.

All teas, tea ware, and tea accessories are sale-priced on the Charaku Fine Japanese Tea website. All items on the WaSabiDou Antiques and Folk Crafts site will be discounted up to 15% prior to invoicing. Please inquire for sale prices.
It also includes over 100 pieces of Idaho potter George Gledhill's work on this album. We have LOTS of pottery, books, prints, textiles, folk toys, and furniture in inventory. Teas stay fresh well into 2018, so it's also a great chance to stock up or gift!
If you are in the Seattle area, please visit the showroom for a look and a cup of tea. We'll also be having an estate sale of some household items, which includes some vintage Japanese things.

After 14 years, this may be my last, or one of the last, Open House Sales. As many of you know, I split my time between Seattle and Mount Vernon,
an hour north in the Skagit Valley. In order to provide closer, and constant, care for my 89-year-old mother; we have relocated her to our primary
town of Mount Vernon and now plan to sell the house in Seattle. After that, we'll be solely on-line, with occasional classes or events in the Seattle area.
We'll miss this spot to display beautiful crafts and to share tea!
DATES & TIMES:
Saturday & Sunday, December 10 &11, 2016
10:00AM to 4:00PM
ADDRESS:
127 NW 136th Street
Seattle, WA 98177
Please call me at 206-660-4189 if you make an on-line purchase, or would like an item held, during the Open House so it won't be sold.
Warmest wishes to you and yours for the season!
Sincerely,
Tatsuo
Posted by Charaku - WaSabiDou at 6:32 AM No comments: 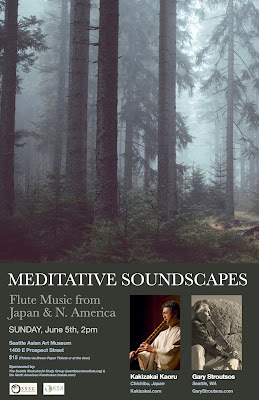 The Meditative Soundscapes project is the product of a first-time musical collaboration between two world-class flute players, Kaoru Kakizakai of Saitama Prefecture, Japan, and Gary Stroutsos of Seattle, WA, USA.  It is a collaboration based on both form and expression; an exploration of the similarities and differences between two end-blown vertical flutes, the shakuhachi of Japan and the southwest desert rim flute indigenous to ancient Native American cultures of the southwestern US.  Though separated by time, distance and differences in culture, the construction and tonal quality of these flutes suggest that they may have served similar ends in evoking powerful emotional, and perhaps even spiritual, experiences for both player and listener.  We invite you to explore for yourself.
Kaoru Kakizakai of Saitama Prefecture, Japan, has been playing the shakuhachi for over 35 years. Having trained under the master Katsuya Yokoyama, he has now become one of his most successful and respected proteges. Kakizakai completed formal musical training at the NHK Traditional Music Conservatory. He has won numerous awards and accolades in Japan, and has performed shakuhachi concerts around the globe. He also has a world-wide following of students through the International Shakuhachi Training Center (Kokusai Shakuhachi Kenshukan) in Tokyo, and on-line. He is currently a lecturer at the Tokyo College of Music, Instructor at the NHK Culture Center, and President and Full-Time Instructor of the Kokusai Shakuhachi Kenshukan.
Additional Bio info at www.kakizakai.com.
Gary Stroutsos performs world flute music drawn from many traditional cultures. Evoking a spirit of place and the voices of the land, his work includes internationally-acclaimed recordings at sacred sites, using the unique acoustics and history of each great space as the starting point for musical exploration. Stroutsos is best know for his significant contributions to the preservation of Native American music through sound and video recordings for tribal projects of the Salish-Kootenai, Lakota, Navajo, and Mandan-Hidatsa. His soundtrack work for the Ken Burns documentary, "Lewis and Clark: The Journey of the Corps of Discovery," led to a command performance at the White House for former President Clinton. He is also well-known for his meditative and modern performances on the ancient Chinese Xiao and Dizi flutes, seldom heard outside of China or outside of traditional Chinese music.
Additional Bio info at www.garystroutsos.com.
For further information, please contact:
Gary Stroutsos
gstroutsos@comcast.net
206-853-2027
www.garystroutsos.com
Patrick Johnson
Seattle Shakuhachi Study Group
genchoku.patrick@gmail.com
425-238-9254
www.seattlebambooflute.org
Posted by Charaku - WaSabiDou at 11:15 AM No comments: