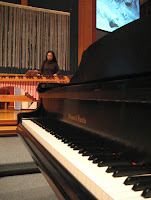 Last night I had the privilege to serve tea at a fund raising event for continued   relief efforts in post-earthquake/tsunami NE Japan. The event was organized by Songs of Hope and proceeds went to Peace Winds America/Japan. Numerous volunteers from the Japanese community were on hand set up, assist guests, sell bake sale items, and clean up. I was just a small part in all of this, but I was happy to provide a warm cup of tea on a freezing Seattle evening to guests offering donations to a very worthy cause.  You can see the program of musicians, performers, and guest speakers on my previous post advertising the event. Here, I wanted to show some of the behind-the-scenes (since that is where I was) helpers who made this a heart-warming and successful event. To all of you who attended, makoto ni arigatou gozaimashita, a most sincere "Thank you."


You can find more information about Japan relief efforts and events on-line at
Peace Winds America and Songs of Hope.

I'll be serving complimentary tea, alongside traditional Japanese wagashi by Tokaragashi and contemporary Japanese pastries by Setsuko Agata, at a Songs for Hope benefit concert for continued relief efforts in Japan. Charaku teas will also be available for sale, with a portion of the proceeds going to Songs for Hope.

The featured performers will be pianist Dr. Sachi Hirakouji, originally from Miyagi Prefecture where the earthquake struck and now a resident of Hawaii, and marimba player Memmi Ochi, a Music doctoral candidate at the University of Washington. A special guest speaker will be Yusuke Usukura, a former Air Defense Official who was stationed  at Matsushima, (very close to the epicenter) at the time if the earthquake and tsunami, and is now living in Seattle.

If you're in the greater Seattle area and can make it, I hope you'll come and support this important cause. For more information, please visit Songs for Hope. 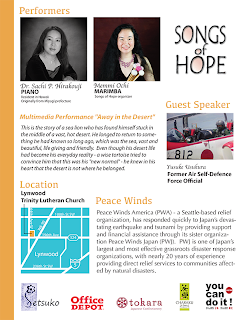 It seems that I've posting lots of food images lately, but as these relate to Japanese culture and have always been a passion of mine; here go some more.

Below are images from traditional Japanese New Year's meals. The foods are symbolic of good luck, long life, prosperity, etc. in their names (sometimes homonyms for other auspicious words) or physical shapes (image the shrimps curved back representing the bent backs of the elderly and symbolizing long life.)

In the morning, the typical dish served is Ozouni, the central component being omochi, glutinous rice cakes grilled to a golden brown. These are served in either clear soup or miso soup, depending on the region of Japan (clear soup - Eastern Japan, miso - Western Japan) or the family's traditions.

Omochi (using the honorific 'O' here before 'mochi') stretches and is therefore symbolic of extending life and prosperity.
Ironically, the chewy nature of mochi also causes a few choking deaths each year in Japan and hearing those statistics is somewhat of a national pastime in the early weeks of the year. Let's hope that this year's tally will be 'zero!'

I usually cook ozouni for my family in Seattle and this year was no exception. Some of the traditional ingredients were not readily available this year so we had to make some substitutions. Instead of chrysanthemum leaves, shungiku  (lit. "spring chrysanthemum,") we used spinach; the daikon radishes in the market this year were non-existent or rotted so we left out the usual tortoise (another long life symbol) shell-shaped pieces of  daikon. Carrots were carved into plum blossom shapes to represent the first trees to bloom after the harsh winter.

We actually live in a rural area about an hour from Seattle and there are few Japanese people out here, and Asian cooking ingredients are fairly limited. However, we are very fortunate to have close friends who are Japanese and are also excellent cooks! Our friends put on a spread of some of the best osechi ryouri I've ever had and that's a tall and serendipitous order out here in rural American farm country.
Other good friends and food enthusiasts come and it's always a wonderful way to start the year.
Osechi Ryouri is comprised of many items traditionally served for New Year's. It's a big job, akin to the Thanksgiving feast in America. However, due to the tradition of avoiding work on the first day of the year, much of the food is prepared in the day's leading up to January 1st. In the past, this required heavy salting and sugaring of foods as a preservative. Now, our friend uses a lighter hand and the balance is perfect. As mentioned, the foods have symbolic meanings for prosperity and long life. I'll skip the Japanese food dictionary here and provide a Wiki link for osechi ryouri definitions. Hope you enjoy the photos!


Guests, including us, contributed some contemporary items to the meal. Our friends just came back over the pass from Eastern Washington and picked up some delicious Huckleberry Wine from Icicle Ridge Winery in Peshastin (next to the Bavarian Village-themed Leavenworth.) Everyone said it was "dangerously delicious" and it's lovely red color kept with the Japanese tradition of red being a celebratory color.  I made a Matcha Cheesecake using our Charaku Premium Organic Matcha. On the side was azuki cream made with anko (sweetened red bean paste) & whipping cream. It's actually a light dessert using yogurt, cream cheese, and whipped cream instead of all cream cheese.
Since there were ten people, including the kids; a number of chawan (tea bowls) were used for serving matcha at the end of the meal. I thought I'd feature this one, a Mashiko-yaki piece by my good friend Lee Love. Lee apprenticed with National Living treasure Shimaoka Tatsuzo and this was a bowl that was featured at his McKnight Residency Exhibition at Northern Clay Center in Minneapolis, MN. (I was the interpreter for his interview with Shamaoka-sensei when I was living in Mashiko in 1999-2000.) The exterior has a traditional Mashiko kaki glaze, and Lee has used some hakeme brushwork on the interior. However, it's the decorative crests on the bowl that give it special meaning to me this time of year. It features the family crest of Ooishi, the leader of the 47 Ronin. Lee and I are both fans of the story of the 47 Ronin, known as "Chuushingura" in Japan. This true story of the epitome of samurai loyalty concluded in the famous avenging scene in the 12th month of 1703. Since then, the epic has become one of the most popular themes in Japanese art and culture, with numerous TV & movie versions aired each winter; as well as frequent new releases of woodblock prints (now comic books,) plays, and even puppet shows. It is an end of the year tradition in Japan to catch one of these, or to visit the graves of the 47 Ronin at Sengaku Temple in Tokyo (as I have) and light incense for each on of them.  To let you know the extent of the story's reach in Japanese popular culture, watch for a new 47 Ronin movie to be released Dec 25, 2013 starring Keanu Reeves!
Happy New Year!
Posted by Charaku - WaSabiDou at 10:17 AM No comments:

On December 16th, I was fortunate to again serve tea at Tokaragashi in Seattle. Chef Tokara is one of the few professional wagashi (traditional Japanese sweets) makers in the U.S. and is luckily located just a few miles from my showroom in Seattle. Our Charaku Premium Organic Matcha was served alongside several of her beautiful, seasonal confections.

I wanted to share some images of her spectacular work here. Wagashi are not only delicious and beautiful to look at; they also elicit an emotional response due to their seasonal nature. Sometimes the reference is visual, with elements in winter like snow, or the last autumn leaf. Or, the reference is poetic with names that take the mind to the implied time of year, much like a haiku poem and just as brief in physical time, but everlasting in its spiritual imprint.  I hope these images take you a place to enjoy the current winter season, wherever you are. Visit Tokaragashi for more info and year-round images of her wagashi creations. 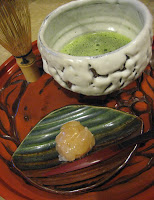 Hatsu Yume (First Dream) features whole white beans surrounding a sweetened smooth white bean paste, held together by a lightly plum flavored gelatin. The first dream of the new year is considered an auspicious sign; especially if the dream is about an eggplant, a hawk, or Mount Fuji.
Here, this wagashi is served with Matcha in White Oni Hagi Chawan on Kamakura-bori lacquer tray. Sweet plate by Mika Sullivan. 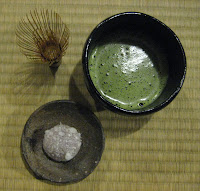 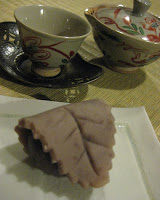 Kogarashi (The Last Leaf) has a red bean paste filling, wrapped with a leaf-shaped rice flour confection. In te background is a hand-painted Gyokkuro tea set. Notice the diminutive size and also the tea pot with no handle. Gyokuro is served at infused at temperatures low enough to handle the pot directly with the fingers, as low as 60 C (140 F.) Gyokuro is therefore enjoyed best in small portions to keep it at the optimum temperature.
Another sweet plate by Mike Sullivan. 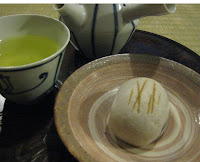 Shibayama (Brush Wood Mountain) is a red bean paste filling enrobed in a soba (buckwheat) flour steamed bun. Washington State is a leader producer of buckwheat and this particular buckwheat is stone ground by hand by the proprietor of a soon to open in Seattle will be a soba noodle shop! Watch for this new venture, Kamonegi Soba. The branded markings represent the small sticks, or brushwood, used to start a fire, creating another mental image of the coldness of winter and the comforting warmth of the hearth. Charaku Sencha is served in a lovely blue & white tea set.